React Native Vs Flutter, Which One is Better in 2022

Vise Tech > blog > App development > React Native Vs Flutter, Which One is Better in 2022 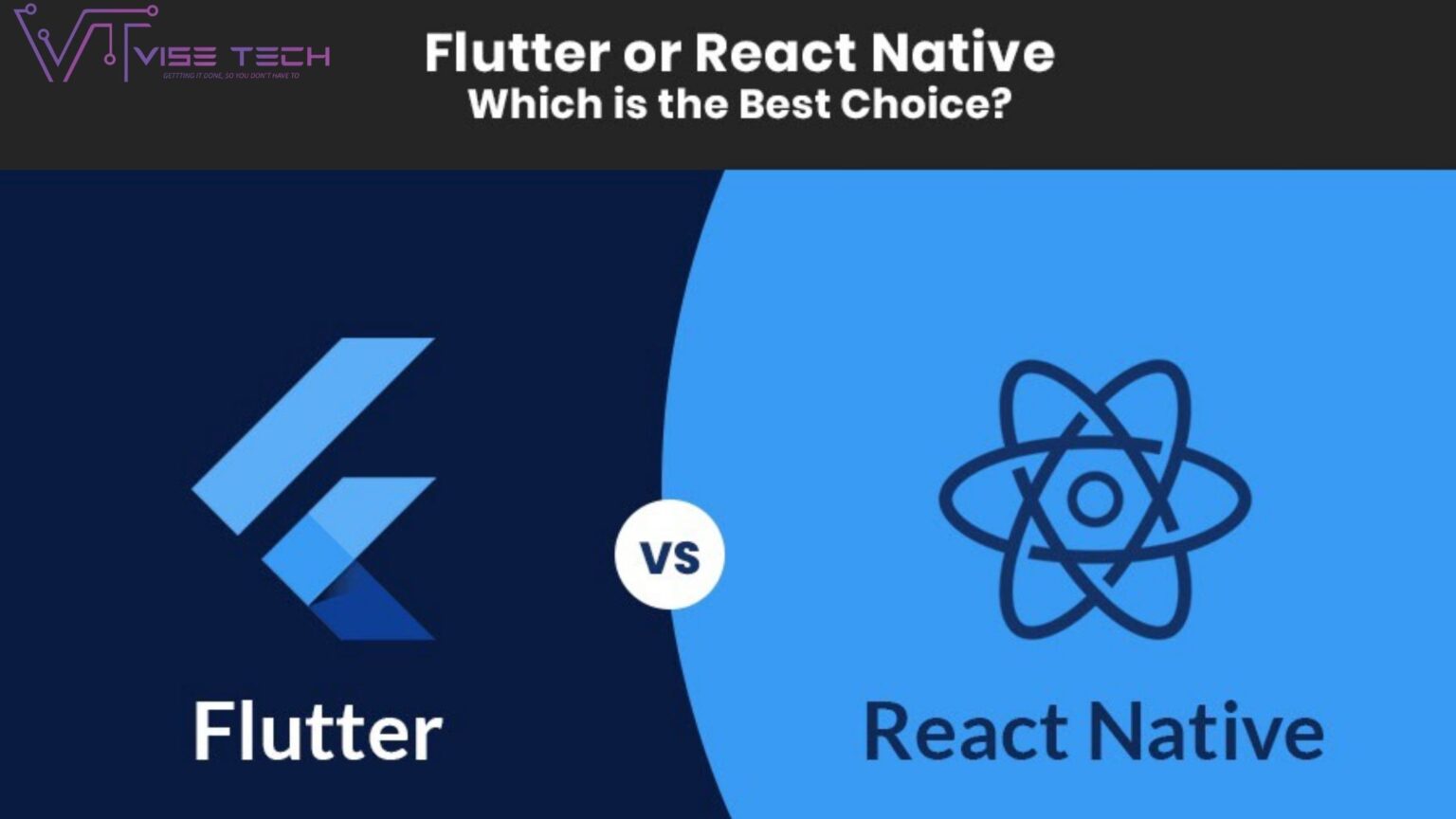 There are many frameworks available, but React Native Vs Flutter are the leaders in the field. Both cross-platform frameworks have their benefits and drawbacks, but many people are left with a dilemma about which framework is best for your app idea.

Are you looking to invest in mobile app design but not sure what cross-platform technology is best for your business? The development industry has been dramatically affected by the rise of mobile apps. Mobile apps are becoming more popular than ever, with over 3.6 million users. Unfortunately, it means that there is a need for new and faster solutions.

For most businesses, however, creating native apps for every platform is a time-consuming and costly waste. They are therefore looking for technologies that can help them develop cross-platform mobile apps. They start to wonder what’s better.

This article will assist you in making the right decision. It answers the most frequently asked questions such as “What is Flutter?” “How is it different from React Native?” “Who will be the market leader?” and “Which cross-platform app development framework should I choose for 2022?

Google has developed Flutter, a cross-platform framework. It was first released in May 2017. The framework continues to grow and is becoming more popular among developers. Flutter is more prevalent among developers if we compare React Native stats to Flutter 2021 stats.

This framework is widespread in Kenya, China and Bangladesh, Japan, Jordan, and Bangladesh. Comparatively to 2020, when 30% selected Flutter, the number of Flutter-loving citizens grew to 39% in 2021.

Why is Flutter so unique? It is, first and foremost, the ability to create cross-platform applications with a single codebase. It means you don’t need to create separate apps for desktop, mobile, and web. A flutter is a single tool that allows you to develop apps quickly.

What is React Native?

Facebook engineers also developed React Native, a popular cross-platforming platform. React Native is used to creating apps such as Facebook, Instagram, and Pinterest. React Native is becoming more popular every day, and developers are choosing it over other options.

React is the foundation of React Native. JavaScript is used to create mobile apps for iOS and Android. It also supports Flutter and allows you to create an app with one codebase. Tom Ochino, Engineering Manager, Facebook, said about React Native that “Engineers choose to use React every single day because it allows them to focus on their products and spend less time fighting with the framework.” However, we only began to understand the power of React after we had been using it for some time. React Native is a popular tool for cross-platform development.

Difference between React Native and Flutter

Flutter renders all components directly on its canvas. React Native converts JavaScript components to native ones. Therefore, component updates do not affect Flutter apps, but they do for React Native apps. It can be either a good thing or a bad thing, depending on your position.

Flutter vs. React Native: Most Popular and Loved Framework

Both React Native and Flutter are very similar when it comes to cross-platform app development technology trends. In addition, both are relatively young and have a lot of community support, so they are both almost equal in the community. React Native was also launched in 2015 and Flutter in 2018.

React Native, therefore, has a larger community and more users. On the other hand, Google supports Flutter, so it is pretty safe to assume that it will catch up with React Native Very Soon. Furthermore, Flutter is widespread in Kenya, China, Bangladesh, Japan, and Jordan, while React Native is used aggressively in Ireland, Argentina, and Canada.

JavaScript is still a key component in modern app development. It is also considered a standard language for most browsers. However, many people prefer to work with a react native development company. On the other hand, Dart is a safe, expressive language that can create desktop and mobile apps.

Which one is more difficult to learn, React Native or Flutter?

Flutter was a relatively new language for developers. Therefore, it required additional learning efforts. However, react Native is based upon JavaScript, and developers are already familiar with it. React Native is, according to the developer, relatively easy to learn because JavaScript is its programming language which has been around for many years.

Therefore, a lot of developers are very familiar with this language. On the other hand, Flutter uses Dart, which, although newer than most programs, doesn’t make it harder to learn. However, developers may need to expand their knowledge because it is relatively new and takes little effort to understand.

You should be concerned about the hourly costs of the developer, regardless of whether you’re a startup founder or an entrepreneur. You should know the hourly rates of Flutter app developers and react native dev companies before you hire them. Let’s find out!

Both technologies can be coded quickly and offer hot reload capabilities. Let us evaluate the productivity of these frameworks using three parameters:

Flutter uses Dart programming language, which allows for sufficient customization of the UI layout and allows developers to create platforms, structural, or widgets that can easily reuse. React Native, on the other hand, is similar to JavaScript and will enable developers to separate executed styles and codes into different classes according to the needs of the app development.

Hot reloading allows the app developer to make immediate changes in the backend. The codes will reflect these changes immediately without saving the file. This feature is supported by both React Native and Flutter to increase developer efficiency.

Flutter is a sophisticated software development tool that developers can install to test internal issues. Flutter is easy to use and requires only a few steps. React Native, on the other hand, can be challenging to install but creates a package.

Technically speaking, Flutter can be described as an advanced SDK with a layered architecture that allows for high customization. React Native, on the other hand, relies on another software to build components and bridge the connection with native modules.

Even if only minor changes are made, the bridge can affect performance. Flutter, on the other hand, can handle everything without a bridge. In addition, Flutter’s layered architecture allows for quick and easy UI customization. This architecture gives you complete control over every pixel of the screen.

It also allows mobile app developers to embed overlays and animated graphics, text, and controls without limitations. To evaluate the potential business growth and future scalability, the main concerns of an organization are performance and technical architecture

Flutter is undoubtedly faster than React Native when it comes to coding. However, app performance is what everyone wants when investing in mobile application development solutions. React Native is an excellent power-pack language, but it is slower than Flutter.

React is a combination of JavaScript and Native languages. Developers can combine native interactions with RN to improve performance, such as notifications, touch events, and notifications.

Flutter doesn’t require additional OS components to keep it running smoothly and faster. Flutter is written in Dart language with C++. It allows for faster performance and can handle many issues on its own. It also results in a fantastic User Experience.

Is Flutter Better than React Native?

React Native and Flutter are both great tools for creating apps that feel and perform close to Native. First, however, it would be best to consider the technical advantages and drawbacks of choosing between these technologies.

If you outsource development, can you hire Flutter developers to help maintain and improve your app? Flutter’s easy learning curve is a valuable asset. When you need developers to jump into a project quickly, Flutter’s documentation combined with Dart will undoubtedly help.

Dart isn’t as popular as JavaScript in React Native, but it’s still a popular programming language. However, it might prove challenging for Flutter developers to find skilled workers.

Cross-platform development with React Native Vs Flutter is possible. Both have unique features like live refreshing or the ability to build graphics. UIs using adaptable software. The project requirements will determine the Choice of the framework. ViseTech developers can create Mobile App for your Business if you want to grow your business.

Different project types may require additional benefits. Announcing a winner is to surpass the characteristics of one framework over another. It makes no sense. You can also collaborate with the mobile app development company to have your project requirements evaluated. Before you choose a framework for your project, it is essential to seek valuable advice from programmers.

Our Custom Software Development Company always delivers fully functional website and visually eye-catching web products moreover we offer our web services and solutions, which helps you to develop and grow your business your way.